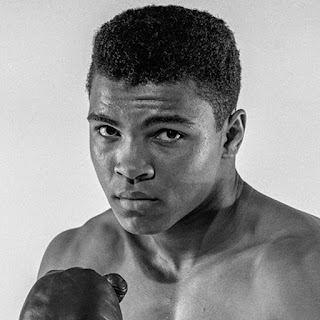 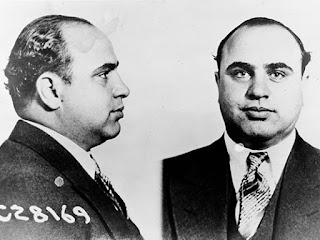 Of all the mobsters in the history of crime, none is as famous as Al Capone. His infamy is mostly due to the fact that he was an extremely violent individual (despite his occupation of "used furniture dealer").

At 14, he was kicked out of Catholic school for punching his teacher (a nun, perhaps?). It was inevitable that, spending his days on the streets, he took to a life of crime.

It's no surprise why his story has been told in so many movies or why he's America's favorite gangster. His life writes itself:

1913-1917: Is a member of the Junior Forty Thieves, the Five Points Juniors, the James Street Gang, and the notorious Five Points Gang. Earns the nickname "Scarface" when local gangster Frank Galluccio slashes his face in a bar fight after Capone makes a crack about Galluccio's sister. Later, mob boss Frankie Yale takes Capone under his wing.


1923: Capone and Torrio move their mob, The Chicago Outfit, to Cicero.


1924: On one of the most corrupt election days in history, Al's older brother Frank is shot and killed by policemen. On November 10, rival gang leader Dion O'Banion is murdered by The Outfit, sparking a war between the gangs for the next several years.


1925, January 24: An attempt on Torrio's life forces him to retire and appoint Capone head of The Outfit.


1929, February 14: Seven members of George "Bugs" Moran's gang (Capone's rivals), are gunned down in what would become known as the "St. Valentine's Day Massacre." "Scarface Al" later bludgeons three of his men to death with a baseball bat. In August, Special Agent Eliot Ness of the U.S. Department of the Treasury forms a task force that will become known as "The Untouchables" to shut down Capone's breweries and gather evidence against him for violating the Volstead Act.


1931, October: Capone is found guilty of tax evasion and sentenced to 11 years in prison.


1934, August: Transferred from the Atlanta federal penitentiary to Alcatraz.


1938: The syphilis Capone contracted decades earlier escalates to neurosyphilis, causing him to often be confused and disoriented. He spends his last year on Alcatraz in the prison's hospital.

1947, January 25: Dies in his Palm Island estate in Florida, just days after suffering a stroke and contracting pneumonia, combined with his long battle with syphilis. During his final years, his doctors conclude he has the mentality of a twelve-year-old. 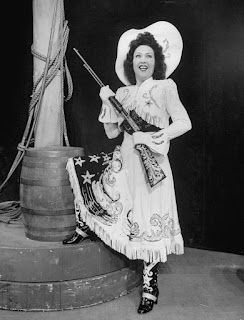 She had a huge, bombastic voice that could strip paint off the walls and flay velvet from the seats at the back of the largest theater. What she lacked in subtlety and nuance, she copiously made up for with sheer power and fortitude. Her unmistakable brassy timbre and brilliant comedic timing made her one of musical theater's most enduring and celebrated stars. Naturally, with that big voice came a big ego, but that only lent fodder to the legend that was the late, great Ethel Merman.

She was born Ethel Zimmerman on January 16, 1908 in Queens, New York, and one can only imagine the cradle-shaking stridency of those first hungry cries. As a girl, Ethel's parents frequently took her into Manhattan to see such vaudeville stars as Sophie Tucker, Nora Bayes, and Fanny Brice, all of whom would prove to be tremendously influential on the young performer. By the time Ethel was in her late teens, she was spending her days working as a stenographer and personal secretary. Her evenings, though, were spent singing in Manhattan nightclubs under the shortened moniker Ethel Merman.

It didn't take long for that singular voice to find fame. George and Ira Gershwin saw her and instantly hired her for their next Broadway show, Girl Crazy. To say she made a sensation is the half of it. On the evening of October 14, 1930, she blew the roof off the Alvin Theatre, with not one, but two show-stoppers: "Sam and Delilah" and the iconic "I Got Rhythm," in which she held a high C for sixteen bars. At intermission, George Gershwin rushed backstage to ask Merman, "Do you know what you're doing out there?" An apprehensive Merman replied "No." Gershwin replied, "Well, just keep doing it!" and forbade her from ever taking a voice lesson.

Hit after hit after hit followed, from Cole Porter's Anything Goes to Irving Berlin's Annie Get Your Gun and Call Me Madam and beyond. She concurrently made a splash in Hollywood, starring in films such as Alexander's Ragtime Band, Stage Door Canteen, There's No Business Like Show Business, and It's a Mad, Mad, Mad, Mad World.

But it was her unforgettable turn as the indomitable Madame Rose in Gypsy that would forever cement Merman's reputation as the musical theater's grandest of dames. Merman was perfectly suited to play the larger-than-life Rose, and one can imagine that her teeth marks still mar the stage at the Broadway Theatre, where she chewed her way through 702 sold-out performances.

Ethel Merman passed away in 1984, leaving in her wake four ex-husbands, two children, a string of brilliantly memorable performances on the stage and screen, an unfortunate disco recording, and any number of shattered eardrums. Not a bad record for a woman who took that advice and never had a single vocal lesson.